The biggest factor affecting Sunday’s play at Centex was the wind, which gusted between 10 and 20mph during any given point. The wind chill and lack of sun made it seem more like a winter tournament than one during spring break. No team truly flourished in the conditions, but the successful teams, particularly Northeastern and Central Florida, were able to grind out victories despite the severe upwind struggles.

The Northeastern Valkyries had grit. They didn’t have the most successful zone defense against Michigan in semis. Meeri Chang was able to find holes easily in their loose cup and after a couple close upwind scores, Michigan scored the first and only crucial upwind point of the half to make it 6-5, then flipped it to take half 7-5. In the first half, both teams had several opportunities to score upwind. The wind favored players like Hannah Walter, who was critical for Northeastern’s close upwind strikes and securing their downwind holds. The tides turned in the second half, and Northeastern’s toughness came into play. Despite the fact that their zone was not as effective as they wanted it to be, they finally scored their first upwind break five points into the half to make it 8-9 and never looked back, taking advantage of a Michigan downwind line without Meeri Chang and Jacqueline Jarik. Everything clicked on offense, and they scored four in a row to win 11-9. After seeing their height, skills, and grit this weekend, the Valkyries have proven their worth as one of the top 7 teams in the nation. 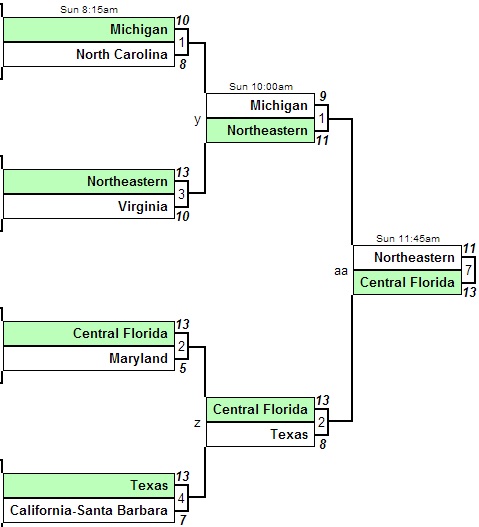 The Sunday championship bracket with UCF as the victor, 13-11 over Northeastern.

We were lonely. Ryan Thompson, Katie Raynolds of Ultiworld, and I stood near the upwind endzone the whole game, and were only visited with a score once. With pulls going only 25 yards upwind, it left little leeway for any break opportunities. Some points were long and laborious, some points were rattled off very quickly on one throw, but they were all downwind goals. That is, until Mariel Hammond of UCF saved the day. With the score tied at 10s, Hammond held the disc for the majority of the point, getting short backfield and upline dishes for minimal yardage. UCF was able to work it slowly, but surely up the whole length of the field, despite loud calls from the Valkyries coach, Jason Adams, to “Front yellow hat [Hammond]! Get in front of her!” At about 10 yards out, Sunny Harris found an open Jodi Dearing in the endzone to make it 11-10. After UCF easily secured the downwind break, the teams traded points to the end, and UCF took the crown, 13-11.

Mariel Hammond played spectacularly. Northeastern’s tall zone learned from the semis round and became scary-looking, even called terrifying by Hammond herself after the game. They attempted to stifle UCF’s best players with a zone defense while playing man defense on Harris – and even sometimes on Hammond as well. However, UCF trusted their star players too much to not give them the disc, even though some passes looked more like handoffs than anything else. In addition to Northeastern’s zone, Harris’ downwind throws were also scary – scarily accurate. She had a notable amount of pinpoint assists, including a phenomenal crossfield backhand break from 15 yards out that found a wide-open Dearing. In order to beat Central Florida, teams will have to find a way to squelch Hammond and Harris, which will be even more difficult without the help of strong winds.

What Does This Weekend Mean?

In terms of rankings and strength bids, Centex doesn’t mean much for the Northwest region, who didn’t have any top ranked teams in attendance. They are sitting pretty, with 5 bids to Nationals and no foreseeable chance to lose any of them.

Colorado State had a strong showing this weekend, dominating the D-III and D-II tiers, and winning the 17th place bracket handily 12-5. They proved that they could steal a third bid for South Central from the New England or Atlantic Coast region.

Virginia, North Carolina, and Maryland represented the Atlantic Coast. UVA and UNC had a respectable weekend. UNC’s games were close enough that they should be able to hold onto their strength bid, but should watch out for Colorado State or UC-San Diego to possibly take it away from them this week. It will be in play next week as well, as a number of teams on the bubble head to the Northwest Challenge.

UCSB had a lackluster showing, losing to both Michigan and Texas, 13-6 and 13-7 respectively. They had narrow wins against UCSD, Iowa State, and UNC. Because of their high ranking, these results are beneficial to their opponents’ regions while not really affecting the Southwest’s strength bid situation, holding on to three bids with none really in doubt. In other words, meh, much like the playing style of the Burning Skirts this weekend. Let’s hope they bring the fire to the series. 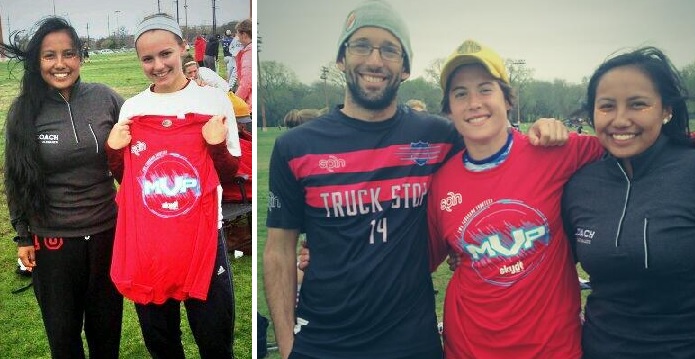 Michigan won the Centex dance off!

Who stole my Torchy’s taco?

I spent Monday hanging out and relaxing in Austin. I got to roam around and play disc golf at Zilker Park after eating tasty breakfast tacos at Taco Deli. Austin is an awesome city!