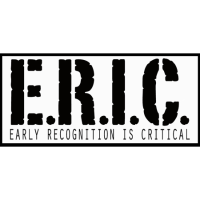 The E.R.I.C Blog by Alexander Morris On Memorial Day, 2012, a group of individuals loosely affiliated through pick-up and summer league entered a local, unsanctioned fundraiser tournament just outside of San Francisco; we were the Castaways.  Rather, we were the Castaways, until one man arrived with freshly-printed, “E.R.I.C.” emblazoned long-sleeve tees, and an intense passion to share with us his recently-founded organization.  In a single moment we achieved a previously unthinkable level of color-coordination, and we became Team E.R.I.C.  And then we learned that we owed twenty dollars each for the swag.

E.R.I.C. has come a long way since then, graduating from being a minor feature at local grassroots ultimate events in the Bay Area and Dallas to the national, and now international stage.  You’ve likely seen “E.R.I.C.” printed across the chests of some of the best ultimate players in the world, perhaps even during a nationally televised event.  Perhaps you know that E.R.I.C. has a habit of forming star-studded teams for Lei-Out, Manila Spirits, and other spotlighted tournaments around the globe (financed by Jim and Nationwide Overspray – all donations to E.R.I.C. go directly towards the cost of clinics and services provided).  E.R.I.C. partnered with the World Flying Disc Federation at Worlds in London this year, and at World Juniors in Poland.  E.R.I.C. sponsors professional teams, club teams, tournaments, and individuals.

Jim Gerencser, having been deeply entrenched in the Ultimate community since 1979, recognized that the women and men who play ultimate are uniquely impassioned with their sport.  It’s a fiercely prideful community, to which fun is the objective and respect is the currency (sorry, bananas and bagels).  It’s also an intelligent and healthy community, comprised of millions of individuals who choose to be active.  This community, and we, the people of it, are the ideal ambassadors of the message which E.R.I.C. exists to propagate.

Early Recognition is Critical’s origin and mission are well-documented, but do bear repeating:

These simple messages have the power to save lives, and, if internalized by a community, the ability to diminish the negative impacts of cancer on that population.  Cue the Speak Up Tour.

Shortly after it was announced last month, a team of E.R.I.C. ambassadors piled out of a colorfully-wrapped Subaru at a middle school in Austin to face 400 exuberant, youthful faces. They spent the day teaching the basics of ultimate, educating students and teachers alike about cancer symptom awareness, distributing discs, embodying Spirit of the Game, and personally connecting with the students.  And the next day they did it again.  Each day a new school, each week a new city. The Speak Up Tour has already personally connected with an estimated 7,000 middle schoolers, and by the time it wraps-up in the spring of 2017, we hope to serve roughly 25,000 more.  That’s what we call ultimate for a cause!  By associating E.R.I.C.’s credo of healthy living with the blissful experience of discovering ultimate, we are helping to shape a generation that will carry forward shared community values and life-saving knowledge.

The response and the energy from participants has been incredible.  Every day, from all corners of the country, we receive new requests for E.R.I.C. to schedule another clinic, to appear at a local event or tournament, to send a representative to speak.

Not bad for an idea born out of the success of a single, one-day middle school clinic, after a school administrator asked if it would be possible to “book the organizers.”  In fact, you can book the organizers!  Reach out to us at info@earlyrecognitioniscritical.org, to find out about how we can support your programs in-person, or with one of our DIY clinic packages which we distribute at no cost.

When asked about the motivation for co-founding E.R.I.C. and kicking-off the Speak Up Tour, Jim’s response was singular and personal: “I hate cancer.”  And with good reason, too.  Be like Jim; join us in “hating cancer,” and help us make this tour the best it can be.  His only regret?  “I wish I hadn’t waited so long before I started giving back.”  Dear readers, please don’t wait.  Step up now, and be the vehicle for positive change that you can be.

You can find more information about E.R.I.C’s Speak Up Tour here.

After having spent some time in Rockford, Illinois for nationals, the tour moved on to Indianapolis for a week of clinics.  Next up: Nashville, and Atlanta, and Jacksonville.

Coming soon: an E.R.I.C.-wrapped tour bus that will enable us to scale up, reaching more youth in more places!