DeAnna Ball first got involved with ultimate in 1991, and whether you're looking at her as a player, captain, coach, or volunteer, it'd be safe to say her time has been well spent. She played at Club Nationals six times between 1999 and 2007, winning the athy Pufahl Spirit Award in 2006. She's coached Ohio State Fever since 2006, bringing home a national championship in 2014, and she's a selection coach for the United States' U-19 and U-23 national teams. DeAnna is also the vice president of USA Ultimate's board of directors. Outside of ultimate, she's an instructional designer for a major publisher's digital education products. 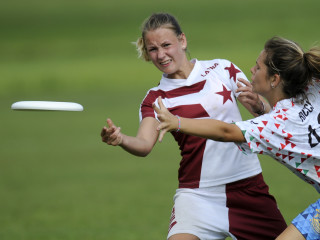 Coach DeAnna Ball explains why you should know the difference between being proactive and reactive when marking or guarding a cutter. Countdown to Nationals: Keep Calm and Fever On

With the clock ticking down towards College Nationals this weekend, Coach DeAnna Ball reflects on Ohio State Fever's season as she prepares for their return to the stage as reigning champions. What happens when you give players more responsibility to lead practices and solve their own ultimate roadblocks? Fever Coach DeAnna Ball learns how to become a true mentor through delegating responsibilities. To Yell, or Not to Yell

It's not just tactics that have evolve. Coaches have to learn the best ways to shape their demeanor to what their team needs. The Coach I Am Not

Focus, a competitive spirit, and productivity can be a lot harder to find at practice than at a tournament. Even a the coach of the reigning national champs can relate. Ever hit that point on Sunday when you'd rather hit Chipotle and head home than play your consolation game? DeAnna has, and so have her players. Read her thoughts on getting over the motivation hump.